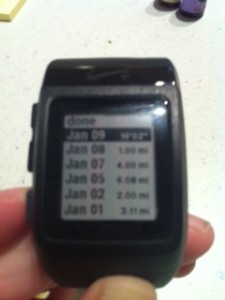 According to our high school lore (otherwise known as the best this 42-year old brain can remember), there was only one pep rally in the four years I was in high school.  (Okay maybe I’m wrong – but there’s only one I remember.) I was a freshman, sitting up in the gym bleachers watching cheerleaders and dancers doing some routine.  All of a sudden, the doors to the outside opened up and in ran two (or maybe 3?) guys in underwear (and maybe trenchcoats?). They had what looked to me like giant fire extinguishers from which they sprayed marbles (or gumballs?) all over the gym floor.  I don’t recall any pyramid of cheerleaders tumbling down in slow motion, but I do recall a lot of immediate chaos and rumors later on that the boys (one of whom was my friend’s brother) were sent to jail or Siberia. I don’t remember any more pep rallies.  And thus, I was introduced to the idea of “streaking”.

I grew up in the 70s and 80s – so I do recall a couple of streakers interrupting baseball games. And I’m pretty sure Richard Simmons entering any room is considered streaking. But as an activity, it’s always ranked right up there (along with sky diving) as something I have no interest in.

And yet I’ve started a streak this year. Fully clothed, mind you – although there was much debate as to whether that would invalidate the streak.

My friend June (otherwise known as she-who-runners-should-fear) somehow got it into her head that she and her runner friends need to run (at least) a mile a day this year.  Yup. One mile each day. Or more if you are training or racing or what not. But at least one mile.

We officially started this past Monday. We have a small Facebook group of us who keep checking in each day and keeping everyone accountable. Of course the other ladies post things like “did my four miles and then did 2 cardio classes and saved 4 children today”.  I merely point out that I ran and then I post silly pictures and slogans reminding us all that the mile counts – whether the pace was 6 min or 16 min.

This is a great idea. Of course I say that now – two days before I run 13.1.  June won’t let that count for 13 days of running 1 mile. (We all asked – and begged – and got yelled at.) So we’ll see how that mile on Sunday feels – maybe I’ll circle the parking lot at the finish line while waiting for Steve to finish the marathon.  (I’d hop in and run the last mile with him – but that would take too much effort – and I’d probably get arrested by a Disney cop.)

Meanwhile – it really is a great way to start a new habit. Cause that’s what’s at the heart of New Year’s resolutions – changing habits.

Of course I wrote this instead of doing my mile…..dang it.  I better get out there…. What are you going to do different each day this year?

It’s National Running Day – have you put in your miles yet today?  I finished 2.53 miles after dropping off the kids at school.

How better to celebrate the day than to add a few more “things to do while running”:

You can run – you can move – you are blessed.  A friend of mine works for the Challenged Athletes Foundation.  They recognize and support athletes with physical disabilities. Yup – people without limbs are running and biking and basically kicking my @$$ when it comes to physical activity. CAF has some very serious athletes among their ranks – people who have met a challenge head on and tackled it. Their abilities humble me and make me remember to give thanks for all I have and all that I’m able to do.

Perhaps your challenge is just getting up the nerve to get off that couch. Perhaps it’s finding shorts that fit. Whatever it is – face it. And take the opportunity to move your body.  It’s the only one you get.

The expression “Grow where you are planted” is an important one to me. When it comes to running – perhaps the expression should be “Run wherever you are.”  Or as one of my favorite reality tv gurus, Tim Gunn, would say, “Make it work!”

I run through my suburban neighborhoods here in suburban Florida.  Many people who don’t live in FL assume that if you live there – you either live at Disney, in a high-rise in Miami, or at the beach.  Nope – many of us live in the “boring” suburbs.  Sure I’d love to run at the beach – but that’s about an hour’s drive to a good one.  Sure I’d love to run trails in the mountains and all the splendid vistas out West.  But I run where I am.

And I enjoy it.  Yes – I like the suburbs. I get to see people I know, people I don’t.  I see babies in strollers and kids waiting at the bus stops. I see neat lawns and shrubs that need trimming. And I see lots of other people running or biking or walking….getting out there and enjoying the FL sunshine and the safe little neighborhoods around here.  How lucky I am.

So – Go get out there today and RUN.  Or at least get off the couch.  Buy some running shoes. Or check out some running websites.  But do it – think about how you can be active in some way today.

In Jeff Galloway’s apps, they include voice-over messages from Jeff himself.  Messages about diet, tips on pacing and form, countdowns, and inspiration. The one message that has been repeated a few times in my workouts is something to the effect that running is the meeting of the body, mind, and spirit.

Yeah…okay I don’t know that I’m the best example of that. I’m kinda like those talking dogs in the movie “Up” when mid-sentence they’ll sniff and yell, “SQUIRREL” and their attention is elsewhere. I try to focus on my pace, or my breathing, or whatnot, and the next thing you know I’m wondering what in the world Galloway means by fill my lower lungs (how can you tell?) and that is quickly followed by thoughts of “do those people driving by think I look like a runner or just a fool?”  I’ve clearly not achieved a zen state during runs.

In light of that – and trying to focus myself – I thought I’d try to find “things to do while running” – both serious and humorous…..so here goes with my first portion of that list:

Things to do while running (in no particular numerical order)

#1 Find a mantra and keep repeating it.

Galloway recommends things like “My legs are strong.”  My recommendations? Something like “There are Hershey’s Kisses at home” or “What the hell am I doing?”  Try not to focus on negative statements (like “Ouch, ouch”) as that can totally bum you out after a few tenths of a mile.

#2 Remember the lessons from Zombieland.

I’m easily freaked out by zombies and movies about them. But the main character in Zombieland points out early in the movie that cardio is one key to surviving a zombie attack. Thus – I figure I’m managing to keep up my stamina by running. And if I don’t encourage too many of my friends to run with me – I’ll have slower friends to hang with (and bump off first) in case of a zombie attack.

#3 Learn to be a human tape measure

My husband is very good at estimating distances when he’s running and even walking. It’s as if his Garmin watch has embedded some of its GPS capabilities within his DNA.

I’m not there yet. I know some basic distances on my usual routes – and I’m well aware of the 4 mile loop in our neighborhood.  But more often then not, I’ll look at my Nike+, note the distance, and then a few minutes later look again and wonder why the distance has changed very little.  “What do you mean I’ve only gone .006 of a mile?? Stupid app. I’m sweating and moving here and you don’t think I’ve moved an inch!”

Okay – not quite what Galloway has in mind…..but I’m still out there – and I’m still….SQUIRREL!

What I’ve blogged about

What you just missed…