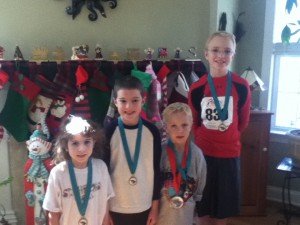 The question we asked each other on the eve of Thanksgiving 2011 was not what time we needed to start heating the pre-cooked turkey (we know better about our culinary skills). The real question anyone should ask themselves is what time do we all need to get up to get 13 people out the door to get to the Turkey Trot on time?  In case you ever need to know – the answer is 5 am.

Of the 13 of us – 10 in our merry band were running.  Four kids signed up for the mile fun run, 2 adults in the 5K, and 4 adults in the 8K. The only ones opting out were a) the senior citizen who has had a heart by-pass and a few stents, b) the senior citizen with two knee replacements, and c) the 18 month old.  We can certainly forgive Grandpa, Grandma, and the baby for being our cheering section rather than participants.

My folks have retired near the beach in North Carolina about an hour north of Myrtle Beach. When we had decided to all gather at my parents’ house for Thanksgiving this year, the question was immediately raised about running a Turkey Trot. Unfortunately my parents’ town is a little small to hold a race…so we scoured the internet for nearby races. Apparently there are two main competing Turkey Trots in the Myrtle Beach area. Not being from the area – we opted to not worry about the local politics about which race was better or “the real one”.  We opted for the one with the t-shirt with the surfin’ turkey on it. Cause every runner needs a surfin’ turkey shirt. And this Trot had the offering of a 5K and an 8K along with a mile race for the kids. Perfect for our family.

Sometime between when we decided to register and the race itself, I happened upon an interview from a few years ago with Zola Budd – now Zola Budd-Pieterse.  I learned that she currently lives in Myrtle Beach and specializes in 8Ks.  So my best guess was – hey – Zola might run this race…..How cool – to run in the same race as an Olympian!  I shared this knowledge with everyone the night before the race. And in looking up the 2010 results, we realize Zola had indeed run the previous year – and rocked it. I was pretty excited to potentially see such a famous runner in person – given the size of the race, I figured that was a stronger possibility than in most venues.

So dawn had not even broken when alarm clocks starting ringing all over the house. Somehow we managed to get five kids dressed, pack a cooler of Gatorade, and get everyone in the cars by 6 am for the hour plus drive to the race venue. Thankfully Grandma often shops at the stores across from the start line so she knew exactly how to get there. I spent the whole ride icing my darn right foot (plantar pain) in hopes it would hold up okay. Of course – it was only 41 degrees outside so I’m not sure I really needed the ice. BRRRRR…..(Oh I am such a Floridian nowadays!)

We managed to find the packet pick-up and take a pee break before finding awesome parking spots. We wound up being super early but it paid off just for those spots. As we got out and hopped around in the cold, my brother-in-law mentioned spying a Starbucks as we came in the shopping area. So we trudged off to discover a Starbucks inside a Piggly Wiggly.  (Yes we are in the South!)  Hot cocoa – along with some donuts – made the kids a bit happier and we killed some time.

Around this time the first part of our running drama started.  Our 6 year old daughter finally came to grips with the fact that we had signed her up to actually run a whole mile. So she started balking, I haven’t practiced, I don’t want to.  She managed to keep this whining up for quite awhile. Given that the mile race didn’t have timers, we were told we could run with the kids – make sure they went all the way around the lake and not into it. So we stood at the start – our son and two nephews raring to go and our daughter crying (yes real tears) that she didn’t want to do it.

The madness of the start  – well madness was exactly the right word. At the gun, gravity took over and somehow our son fell down (Grandma claims he was pushed) and our youngest nephew went down too.  Somehow Steve jumped over them, grabbed our daughter and ran with her. Our son got up and took off – but our poor nephew had a bloody knee and an instant bad attitude about it.  I tried to help him but left my brother to help him out and I took off to catch up with my daughter.  She was easy to spot for at that point – she chose to sit down on the grass.  I immediately grabbed her hand and kept up a steady pace of encouragement.  She kept up a steady stream of tears and cries of  I don’t want to do this.  We managed to get to the 1/2 way point and Steve took over again.  I peeled off and went to the finish to find the rest of the brood.  Our oldest nephew finished in 9 mins – and I managed to catch our son’s finish at 11:13.  He was so happy about that medal. And Steve and the ball of tears came in at a respectable 13:30. She had apparently stopped crying for the last half…but hadn’t cheered up until hours later.  Sigh.

Next up – the 5K and 8K start. So we had to go about 1/4 mile away to the start and stomp around till the gun. Our little nephew had gotten a band-aid and decided to run alongside his dad for the 5K. He’s a tough little cookie. The gun went off and as usual it’s a mess of people until we all got sorted out after about .3 of a mile or so. Steve started way up at the front (and subsequently finished 3rd in his age group for the 8K – WOO HOO!) and my sister of the middle school pants and her husband lost me early on. But I managed to run along with my brother and nephew for awhile. I felt pretty good – the pain in my foot still nags me but the worse was my endurance as I’ve backed off of training due to the pain. My nephew was cracking me up cause every time I passed him – he’d run faster to get ahead of me and his dad! Thankfully he didn’t keep up with me for the the turn for the 8K. 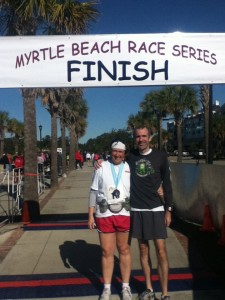 As I did the turn off – I realized pretty quickly that this was a small race – and a fast one.  I apparently missed seeing the guy who ultimately won as he doubled back from the 8K turnaround.  But not more than .2 miles down the stretch, I saw a woman racing back toward the finish. I think it was more instinct than visual skills that I knew it was Zola. Running like I imagine I look like in my dreams (which is a pretty clearly just a dream). But there was an ease in her movement that made me feel like time stopped – as if I were watching her in slow motion for just a brief instant. And I had a feeling like I could do anything just watching her. I resisted any urges to wave like a crazed fan – but I couldn’t help but marvel at running as a pretty good equalizer. Here I was running on the same race as an Olympian. Sure I was miles behind her – but I ultimately got the same medal as she did….and I ran the same distance she did. And for a moment or two, I felt a kick from that idea.

As I wound down the 8K spur – I waved at my husband, and then at my sis and her husband….and I was happy.  Until I made the turn around point and realized that there were only a handful of people behind me. So I had to work hard on that mental game of “I’m not doing this to win – but to do my best.”  It’s apparent that this is not just a small race – but a FAST one….the slower runners clearly do the 5K so there were far fewer of us at the tail end of the 8K.  And the one woman who just WOULD NOT let me get ahead of her annoyed me….but when I realized that I was beating my expected time….I realized I was doing a better job than I expected. As I had about .2 mile left, my two nephews and my sister came out to run me in – and I kicked it a bit. 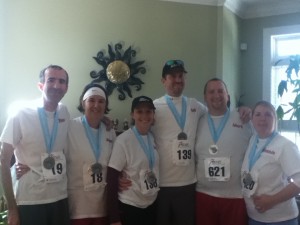 My kick got me in at 58:55 with a pace of 11:52.  Not too shabby – esp since my Nike+ apparently lied to me about my timing.  I was only 28 minutes behind Zola who finished 1st for the females and 2nd overall. And although she beat me (of course!) – watching her run certainly inspired me to know that what I’m doing is okay….even if my pace is a lot slower than hers.

And yes I was the last one of my family to cross the finish – but I did it. My first 8K. And the first race I’ve been in with Steve. And the first time I’ve run past an Olympian. The medal and the surfin’ turkey t-shirt are great relics – but the race overall made me realize I can do Disney. At least I think I’m back on pace for it.

Happy Thanksgiving y’all – may you have as much to be thankful for as I do…..on the race course and off. 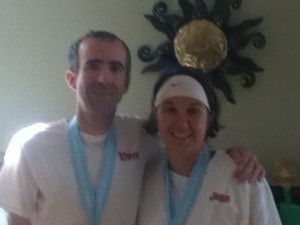 me and my speedy husband

What I’ve blogged about

What you just missed…