As I cleaned up the kitchen this morning, I put in the DVD of School House Rock for the kids to watch……“I’m just a bill, yes I’m only a bill…”

I should be finalizing my long overdue post about our Disney races.  I should be stretching and doing some running work.  I should be grading papers.  I should be wrapping birthday presents for Steve. There’s a lot of “shoulds” that any one could choose from.  I figured most pressing was that I SHOULD be able to find my kitchen counters.  And floors.  And island.  And maybe my bathroom floor.

But my mind is far from housework.

I’ve been pondering the last week or so of my life and I’ve come to the conclusion that I am naive.  Or I’m an optimist.  Or some combination of both. Either label will do. Because I happen to always believe that good will prevail. Always.  Every time.

The short version of the story is that it’s come to light that our county is in the process of permitting a developer and come in and build a big box store (probably Walmart) plus five outparcels (such as fast food stores) AND up to 300 apartments on a piece of property.  The issue isn’t “promoting” economic development.  And for me the issue isn’t really about “Walmart.”  I know people who don’t shop there – and I respect that.

The issue is that this piece of property happens to front on a very congested road right next to the local high school, the public library, and another shopping center.  It is across the street from three residential streets and just down the street from the YMCA and the entrance to a huge neighborhood with several subdivisions, a little league ballfield area, and two public elementary schools.  All locations that are busy with families and children. They are proposing entrances and exits (probably without stop lights) onto this already crowded roadway AND onto another road which has been deemed a “roadway failure” by the county itself.

Those of us who travel this route daily understand why we have to leave our houses 30 mins early to get to ballet or karate or church. Looking at this plan, we may have to start helicoptering in and out of the neighborhood if we want to get anywhere at all.  Long story short – the stupidity of this plan is evident to any local resident.  But apparently not to those who run our county.

And yet they won’t.

We get double speak.  We get tons of calls and emails about the “process being followed” and that “the zoning was changed and this is allowable”.  I even emailed the school board to remind them that just a few months ago 11 high school students were injured when two school buses collided on this road.  The school board’s email response to me was to say “Once it’s built, we’ll have conversations with the shop keepers if necessary.  Maybe we’ll get a turn lane put in if necessary.”  Dear God, these are the people that keep getting voting onto the school board despite me voting against them each and every time???

The point being that the county’s current stance is to repeat until they are blue in the face that “this is the process we are doing, nothing illegal, and the developer has the right to do this.”

And yet I’m actually proud of this.  Because I’d like to think that my grassroots campaign to email and FB EVERYONE I KNOW is the reason that some of the county email inboxes have blown up this week.  They could have been having lazy lunches and coming up with other idiotic bureaucratic red tape that gets them what they want without considering what the people who live here want. But instead – they were fielding calls and emails that I helped jumpstart.  They even had to come up with a public statement that I think they never expected to have to research and write. Yeah, I’m patting myself on the back just a smidge.

And yet there has been no solution as of yet.  They just offer to let you talk to the county attorney so he can tell you the laws and why they are following them.  And they say, “sorry no public meetings cause this is all just hunky-dory.”  They are missing the point.

Things can be perfectly legal and yet be DUMB ASS ideas.

It’s legal for me (a resident over the age of 21) to sit on my couch and gobble up all the fast food and guzzle down all the Boone’s Farm I want all afternoon (as long as I don’t drive somewhere afterwards).  But frankly – that’s a dumb ass idea.  And you know it.  And so do the county people – I hope.

And thus I press on.  I do.  I intend to email and call until someone in the county stops telling me about zoning laws and starts to tell me what THEY are going to do to CHANGE this stupidity.  Until then – what I am going to do is challenge them to CHANGE it.

I spent a lot of time in the 80s playing with kids at someone’s house while our parents organized the PTA and others to protest the closing of our elementary school.  T-shirts were printed, meetings were attended.  My parents were on the phone with people all the time. They were probably in the news but I don’t remember that.  I do remember sitting in the basement of someone’s house while the parents organized upstairs.  We kids were watching “Red Dawn” – which seems perfectly appropriate.  WOLVERINES!!!!  Sadly, Landing Elementary was closed, sold, and turned into houses. Probably some kids living there now have no clue that we played tag, held spelling bees, learned how to draw in perspective, memorized multiplication tables, started schoolyard fights and crushes, and held field day events in what is now their backyards.  So goes progress.

But I press on.  Despite the “loss” my parents’ group suffered, I maintain that anyone can fight the good fight and good will prevail.  That is what I learned throughout my childhood. Look at the influences I had:

I grew up on School House Rock and learned that anything you learn can be put to song.  And that our government is FOR the people and not a bunch of monarchs.

Daniel-san defeated the bad guys (on one foot) in the Karate Kid movies.  One foot, people!

I rooted for the Goonies and wept openly when they found the treasure and saved their homes.

And heck yeah, I’m not declaring love for Hugh Jackman when I yell “WOLVERINES”.

The Death Star DID get blown up – twice.  Sure the rebels had to freeze their butts off on Hoth and deal with the dopey Ewoks – but they hung in there and prevailed.

People work hard and get things done together – yes Laura’s sweet big sister Mary went blind, but even that nasty Nellie got her comeuppance every now and again.

ET makes it home without becoming a government experiment. Bicycles are the only way to outrun the government.

The Nazis didn’t close their eyes but Indy was much smarter than they were.  (No I’m not equating the local government with Nazis – far from it.)

Wesley was only “mostly dead” and thus came back to defeat evil and rescue Buttercup.

You can take your DeLorean back just a few minutes earlier and take out the terrorists and rescue Doc.

And don’t forget – Ferris was able to trick Mr. Rooney.  (Okay maybe not the best example but still)

*if you don’t get these references, you might have missed the 70s and 80s – and you might need to rectify that with some Netflix now.

The point?  Good always prevails.  I believe it.  I have faith in it. I live my whole life this way.  I have high expectations for people.  This is not about politics (cause I don’t discuss my politics with most people) on the left or the right. It is about the basic expectation that we act and behave in accordance with good.  I expect that people will understand stupidity and fight against it – within themselves and in others.  And yes I have fallen way short myself.  I am not perfect. But I work on my faults.  I set higher expectations for myself when I stumble.  How else are you going to get up and keep stumbling forward?

I expect that, sigh, one day there probably will be a Walmart on this piece of property – but I’m not going to make it easy for them. I expect I will never set foot in it.  I expect that I will keep pressing on the county leaders to change what is wrong and corrupt within their system.  I expect myself to keep speaking up and fighting for my community.  I expect myself to rally others to the cause and to find a better voice than mine, to find a more knowledgeable person than myself.  Because somewhere out there is a Mr. Miyagi who is wise.  Somewhere there is a Doc with a superflux capacitor to fix this.  Somewhere there will be the next leader who will help prevail over injustice.  Maybe Batman will come along when we need him.  Or maybe Sean Astin is free.

Either way – I know that I’m doing what is right.  And sometimes what is right gets knocked down – but right never walks away.  Simply dusts itself off and stands up again to fight another day. 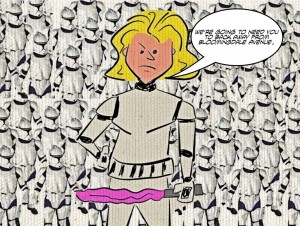 Designed by the awesome Calmixx. Visit his website (cyberhouse5.wordpress.com) and “like” him on FB. He’s a good friend.