There are some people who fret about how much fuel is in their car’s tank. For example, on long car trips with my dad, my mom worries when the gas gauge gets below 3/4 of a tank.  Okay maybe at 1/2 tank. But the concern is that you might not know what’s around the bend so you should keep it filled up while you can. You don’t want to get caught on empty in the middle of nowhere.

My stomach is exactly like that.  It constantly thinks it’s in this state: 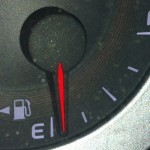 In actuality the gauge is probably more like this: 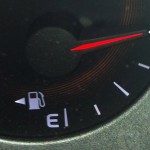 In addition to poor skills at measurement, my body is apparently very bad at subtraction. I mentioned to the doctor that earlier this week I had eaten roughly 1200 calories and burned approximately 400 in exercise that day.  When I stood on the scale the next day, I had gained 2 pounds!  What in the world????  The doctor’s response – you’re not eating enough.

Oh yeah that must be it.

Apparently when I don’t eat much my body is worried that the next gas station isn’t for miles and miles.  So we have to hang onto all the lovely fat – and even multiple it when possible. My stomach isn’t clued into the fact that there is food in the house and it will last for awhile.  Stupid stomach.

But I am trying and I am being good. The loss has stalled for a few days – but I’m determined to get my stomach and body to get with the program.