We were fortunate to get to go to the beach for a few days last week. 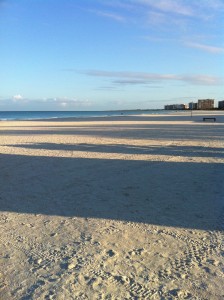 great place for a run!

Got to run on the beach.  The view was amazing….so amazing that I forgot to check what my hotel looked like. Yup – I got lost on the beach. I was really confused why the hotel was setting up tiki huts on the beach when I was sure that they had had blue umbrellas the day before.  Now, you might think – Gee, didn’t you just look at how far out you ran and then double that for the way back and find your hotel right where you left it?   And that was my plan – but apparently I can’t do math and run at the same time.  Steve laughed at me (a lot) when I called him on my iPhone from the beach.  And then he laughed again when I got up to the room.

I actually braved another run the next day after memorizing EXACTLY what our hotel looked like.  But this one was just one mile – I wanted to try “barefoot” running.  That is – not running without shoes….but with my Merrell pace gloves on.  I’ve been wearing my Merrells since Christmas – just for walking though as barefoot running takes some building up. I’m not sure I want to ultimately run in barefoot shoes exclusively. But I’ve found that the shoes have helped strengthen my feet a bit.  Not totally getting rid of the stupid plantar pain – but I find it does help.  And running in them turned out to be fun….and yes I found the hotel again.  Whew.

The barefoot run was partially inspired by the fact that I had ordered a new pair of Merrells – their new Bare Access Arc. I had tried them on at the Gasparilla expo and found them to be SO comfortable.  They look more like traditional running shoes but are so lightweight.  I was so tempted by them that I figured at some point I would order them and try to run in them a little.

A few days after we got back, the Merrells showed up – all 5 pairs!  Yes we are clearly an insane family.  Steve has taken to running in his Merrells. And he had gotten a pair of the leather ones for work. And he ordered more pairs of the leather ones as they are likely to be discontinued. And of course the kids have worn out their sneakers…..and I wanted a pair of comfy sandals too.  Since Thanksgiving time, we have acquired 10 pairs of Merrells for a family of four. 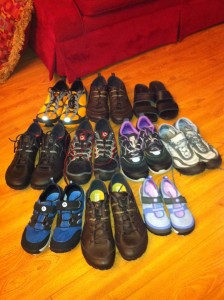 50% of them belong to Steve.  When he looked at this picture his comment was, “I have to stop now.”  (When I met him – I think he had 4 pairs of shoes total.  LOL)  I wonder if Merrell has a customer loyalty program.

For the record – the kids LOVE their Merrells. We all went for a quick run after we got our new shoes.  Both kids argued that they were now MUCH faster than they had been before. And I found mine to be very comfy to run in. I think I’ll like trying to incorporate short ‘barefoot’ runs in with my workouts….

And in other news….we shall not talk about the “project weight loss” right now….but I’m still sticking to it and hoping that more progress is around the corner….just gotta run after it!

2 thoughts on “Toes in the beach”