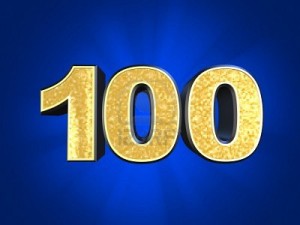 Woo hoo!  This is my 100th blog post!  Wow….never thought I’d make it that far when I started this blog almost a year ago.  Then again – I never thought I’d actually consider myself a runner.

If this were a television show, 100 episodes would mean I’d be all ready for a party with cake and syndication.  Given my recent dedication to losing weight, the cake is right out.  As for syndication, I’m not sure how well these posts hold up in reruns. But if you haven’t perused the whole shebang – take a look back to some of my oldies but goodies while you’re here.

So how should a blogger (whose readership is limited to a few kind friends and family) celebrate such an accomplishment?  Cause clearly this is cause for amazement and wonder….and presents!

Well in my case, I killed a fish.

No no – not intentionally.  In fact, I was doing the fish a favor at the time.  I was cleaning his bowl – see very nice – when he decided to keel over in the “holding” bowl.  I would like to point out that I was rather sweet to let him flop his last in my favorite Pampered Chef batter 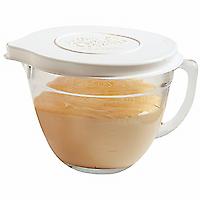 bowl.  Not all mommies would be that kind. But I’m thinking that I won’t be making pancake mix again until I disinfect it thoroughly. (My apologies to any and all Pampered Chef reps – I love your products….apparently fish would die for them.)  I would also like to point out that I refrained from yelling at said (dead) fish that I had now wasted all that time cleaning out a bowl for a fresh corpse.

If you are a fan of this blog (and if you are – definitely hit the Facebook button on the upper right side of this page!) you’ll know this is not the first time we’ve experienced fish death in our house.  (Click here for the full story.)  This was the last of our Rosy Reds….and we still have a beta that seems to thrive on filthy water.

And as with the previous perishings – our son got to witness the horror first hand.  He happened to get out of bed just at the wrong moment. However this time he was less mad and freaked out.  In fact when the fish tried valiantly to kick himself back up (I presume to say good-bye), our son started saying, “Zombie fish, I have a zombie fish.” He’s all 8 year old boy – pets are cool but zombie pets are even cooler.

I pray we don’t encounter any zombie rats anytime soon.

In other news….. I did celebrate today with some running.  Managed 1.5 miles today with a friend.  Foot’s not doing too badly but we weren’t breaking any speed records.

And we signed up for Disney 2013!!   Steve is doing the Goofy (because he is insane) and I’m signed up for the 1/2 again.  And Steve has reiterated his promise that if I shave 13.1 minutes off my time from this year – I get to go shopping for a Coach purse.  Between the weight loss deal and the run – this could be a profitable year for me.  🙂   Before we signed up – I called my parents to very sweetly ask if they would join us in Disney to watch the kids the morning of the 1/2.  Because I called before his alarm went off, my Dad was very willing to say yes.  (Thanks Dad! Hope you didn’t rethink it after you had some coffee!)  I’m hoping my sis and her husband will do the 1/2 again with us.  (Pretty please??)

So – here’s to Stumbling Forward into the next 100 posts….hope you join me!